Sanjay Kumar (Sanj, to all who know him) leads the Dhol Crew.

Though some might say that 14 was too late to reach professional player status, but Sanj worked hard and was fortunate to study under the renowned UK Dhol player - Mr Gurcharan Mall - learning from him and his team for a number of years. 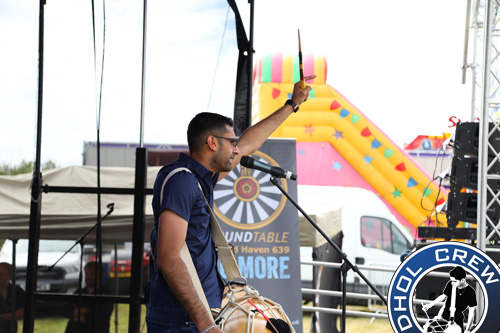 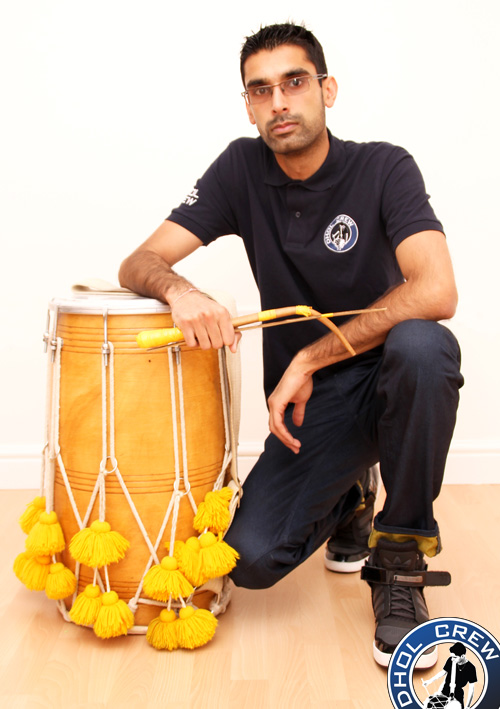 Whilst studying with Mr Mall Sanj saw the impact Dhol players had when performing at weddings and he knew that he too wanted to inspire people, both young and old to get out of their seats and dance to the rhythm of the Dhol. So he started out playing with Mr Mall's group and then went on to become a solo artist, performing with DJ's, bands, singers, bhangra groups and band baja groups.

He has participated in festivals, appeared on TV, taken part in charity events, and has appeared in a pop video. His most memorable Dhol performance was performing Live at the BBC's Blue Peter Queen's Jubilee Party in 2002 where he opened the concert.

Sanj's years of experience in entertaining means that he is a confident performer who knows how to encourage the audience to participate in the "dance of the dhol". 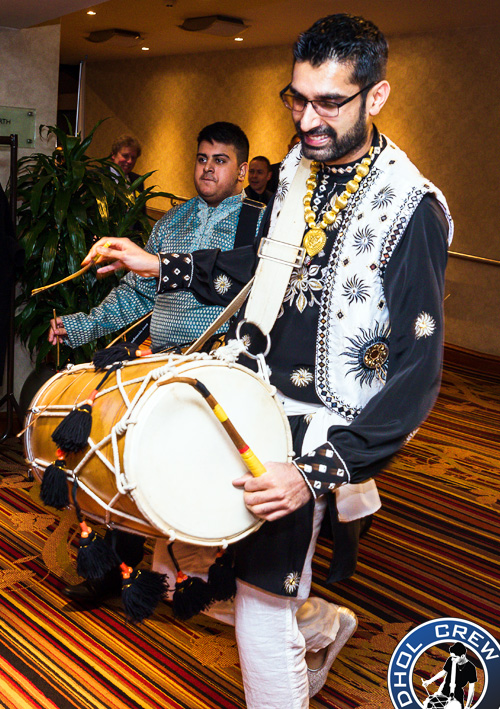 Sanj was first inspired to learn to play the Dhol after listening to the sounds of BhangraDhol Crew - The Future of Indian Drumming Sanj's most memorable Dhol performance was performing Live at the BBC's Blue Peter Queen's Jubilee Party, where he opened the concert.

His family and friends soon recognised that he would make a great teacher due to his enthusiasm and passion for Dhol playing and his relaxed and inspiring attitude when he was with young people. So in 2004 he started teaching Dhol classes in Birmingham with a few students and then he started a Dhol school in West Bromwich.

Sanj has been checked by the Disclosure and Barring Service (DBS) and can provide you with a copy of the certificate if you need to see it. 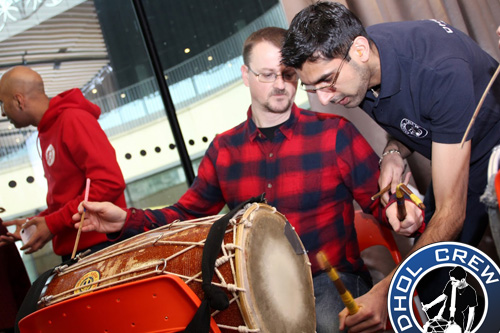 The creation/setting up of the Dhol Crew

With the student's eager to listen to his stories of performing Live, Sanj soon realised that in order to develop his students' playing ability further and to encourage them to continue playing they would need experience of performing Live - so in 2008 he set up the Dhol Crew. 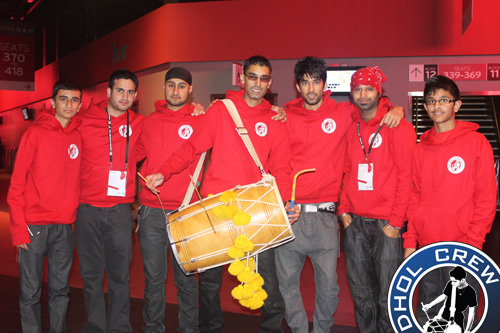 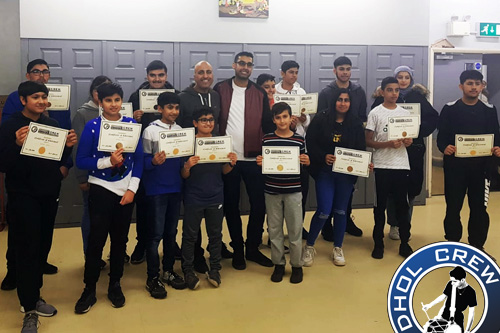 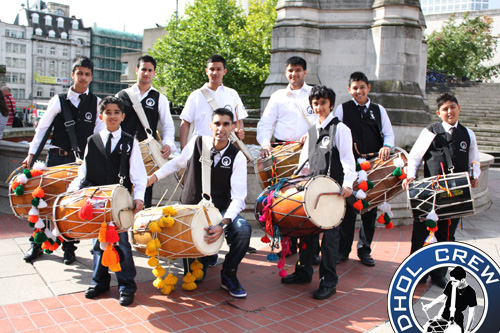 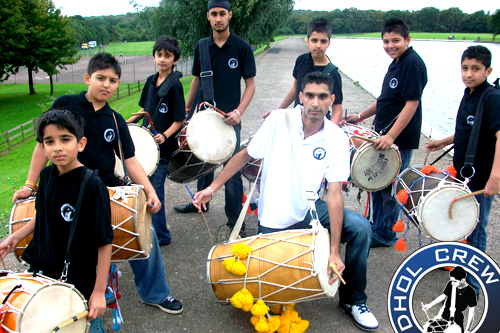 The sounds of the Dhol Crew

Though playing traditional Bhangra tunes was important to Sanj he wanted to create a sound that was new to the UK and possibly the world.

Sanj also felt that it was important to bring not only the generations but also those from different musical genres together.

So whilst studying sound engineering at university and studying alongside many talented young musicians Sanj was inspired to create a fusion between traditional bhangra music and modern rock music thereby creating an original sound.

Sanj also wanted to showcase the instruments used as he felt that "their power/centrality/position" was often lost when accompanied by singers - this also allowed the audience to get lost in the beat of the music rather than focus on the words of the song, thereby creating an original act.

Dhol Crew and the Live band performs a mixture of rock with bhangra music. The show provided by the Dhol Crew and the band is a fun and entertaining set for everybody of all cultures can enjoy.

Booking Dhol Crew and the band can provide 15 minutes, 20 minutes, or 30 minutes set of entertainment.

Dhol Crew and the band are also available for weddings. They can provide the bride and groom walk in entrance into the venue, and can also provide any other additional sets. 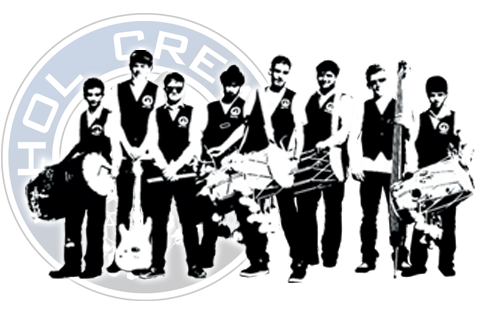 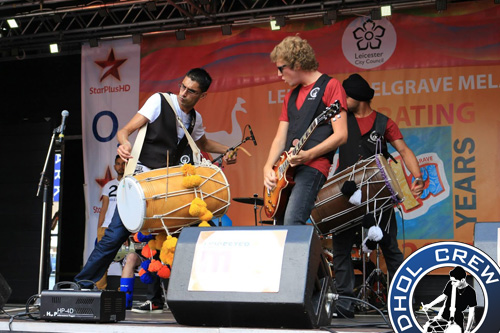 If you book Dhol Crew and the band for your event there must be a professional "In House" PA system provided. Otherwise, if PA system is not available, then Dhol Crew will be able to provide this but prices will vary. Dhol Crew can provide the backline which includes their instruments, amplifiers (amps), and microphones (only for their instruments).

If PA system is provided there must be a sound engineer, monitors, FOH speakers, and mixers for Dhol Crew and the band to perform at your event. 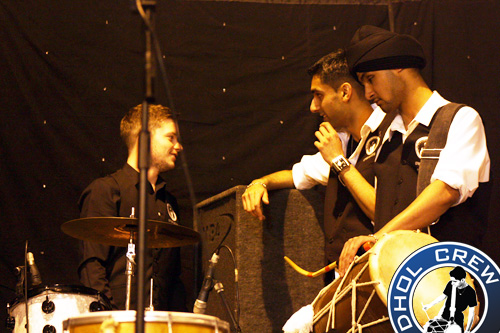 The Dhol is a drum that dates back to the 15th century.

The Dhol is a drum that dates back to the 15th centuryIt was probably introduced to the Indian subcontinent via the Persian drum type Dohol (duhul). The Indo-Aryan word 'Dohl' appears in print around 1800 in the treatise Sangitasara.

The Dhol is most commonly associated with Punjabi music and dance. It was used in war by the Sikhs and later to celebrate successful harvests by the landowners. This drum became the ground roots for modern Bhangra music. The Dhol drum is a very common instrument in the regions of Punjab in India and Pakistan. From north India the Dhol spread to other parts of the Indian subcontinent as well.

The Dhol is a double-sided barrel drum (straight barrels also exist) played mostly as an accompanying instrument to the traditional Punjabi dance of Bhangra and the religious music of Sufism, Qawwali.

The drum is played using two wooden sticks, usually made from bamboo and cane wood. The most common rhythm played on the Dhol is the Chaal, which consists of 8 beats in a bar.

Though primarily it was meant to be played in festive occasions of - Lohri and Baisakhi and family get together's like weddings etc, today it has gained remarkable acceptance and popularity. A typical Punjabi song cannot be without Dhol beats. 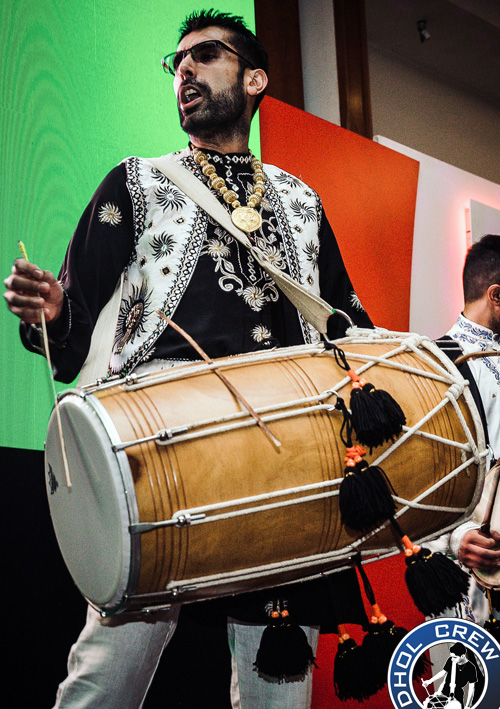 Dhol Crew TodaySanj started learning Dhol because of bhangra music. Even though Sanj loves all sorts of music whether it was hip-hop, rock, RnB, dub-step, drum and bass, Hindi, Reggae, and so on, he was always intrigued by bhangra music due to the fact that the sound of the Dhol was always heard in majority of the songs. It was the rhythm of the Dhol that got Sanj to be so passionate about.

As a kid Sanj would always go to a lot of weddings. At the weddings he always saw DJ's and Dhol players performing at these occasions. As these artists were to do their set throughout the day or night, people, friends, families, and including Sanj would get up out their seats and dance. Because of the crowd reactions, people having fun, and appreciating the artists work, this led Sanj captivated and he was keen to learn Dhol and wanted to perform as quickly as he can once he had mastered the art.

At the time Sanj's Dhol group and also his Dhol classes were successful but he wanted to do something that nobody had not done before in the UK.